The Pyrenees is a mountain range of Alpine folding which is over 1500 km in length. It is the result of continental drift of the Iberian Plate during the Mesozoic and his final collision with the European Plate during the Cenozoic. The territory of the Geopark is located in the southern flank of the Pyrenees.

The territory has a relief of great contrasts, formed by some mountain ranges and basins of east-west orientation, determined by the arrangement of several landslide mantles that make up the Pyrenees, and at the same time they are correlated with the geological record of the past 550 million years of the geological history of Catalonia. Owing to its geodiversity, outcrops quality, ease of access and security, this territory has international recognition as a natural geology laboratory reflected in countless theses and numerous scientific publications, which are continuously expanding.

At the north, you can find the Axial Pyrenean zone with the oldest rocks of the mountain range. The current structural configuration of the Axial Zone is due to the stacking of antiforme landslide mantles (Orri, Rialp and Nogueres) associated with the Alpine Orogeny. These materials, which arise in the area of Vall Fosca, mainly Paleozoic has been heavily distorted by the effects of the Hercynian orogeny and was affected by batholith intrusion and contact metamorphism in the host rocks.

The Prepyrenees is located at the South of the Axial Zone. There are identified tectonic structures known as “upper mantle southpirenaics” which are basically formed by rocks of the Mesozoic and Paleogene which are younger than the Axial Zone. These tectonic structures consist of three major landslide mantles from north to south; they are called Bóixols, Montsec Marginal Serres, and they have some ranges associated with a direction from east to west, parallel to the direction of the mountains. Simultaneously with the location of these thrust plates, some intramountain basins originated (Tremp Basin, Ager, Oliana). There you can find sediments, structures and previous paleoenvironments, which are contemporaries and come later to several tectonic episodes. Alluvial systems begin to install themselves up along the front range of the Oligocene. While the Pyrenees were rising, they eroded the relief generated and simultaneously, the sedimentation of conglomerates forming important reliefs attached to the mountain landslide mantles were produced. Their distribution and characteristics were conditioned by the tectonic evolution, allowing the establishment of regional tectonic and sedimentary contexts.

The Quaternary period is characterized by a great climate instability that conditioned the dynamics and processes of the relief formation. Glaciers transformed the topography of the highest mountain range and the widespread drainage occurred (Noguera Pallaresa and the Noguera Ribagorçana Flamisell), creating dramatic gorges that cross the mountains and basins (Mont-rebei Gorge, Terradets, Collegats). In the Pyrenees, most Quaternary sediments have a glacial, torrential deposits, alluvial and hillside origin. It is also noteworthy the accumulations of travertine, very important in the Tremp Basin.

Geological map of the Orígens Geopark (Lleida Province, Catalonia). Made by Cartographic Institute of Catalonia (2015). 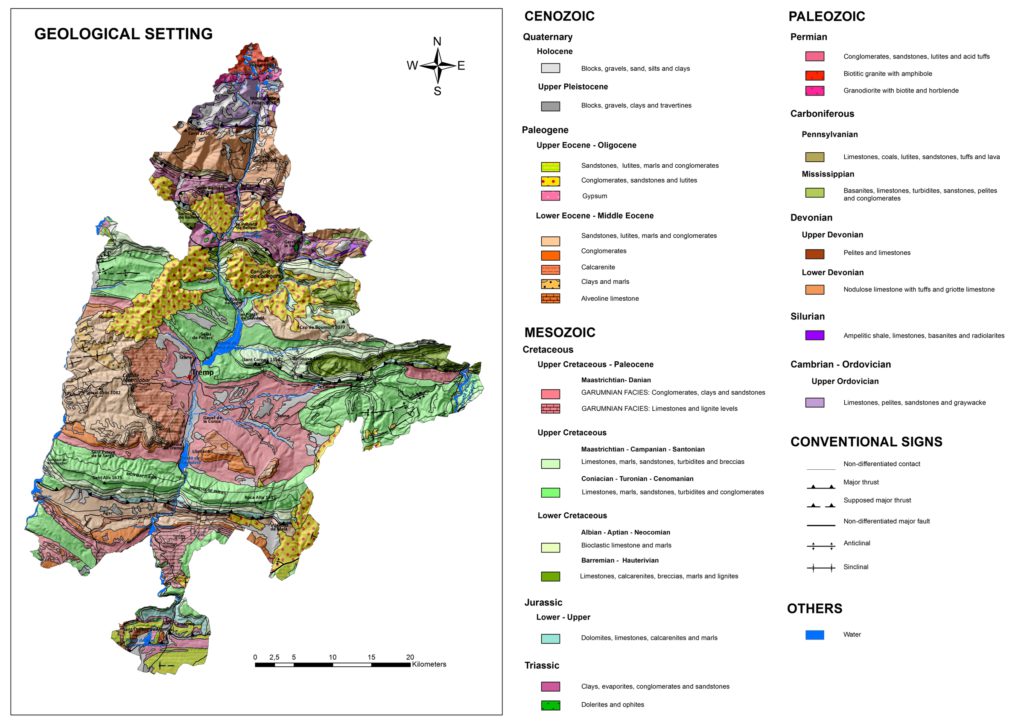