The Origins Geopark was recognized by UNESCO on April 17, 2018.

It has been two years since its acknowledgement, which has meant placing this Catalan territory in the world, for its geological importance and its natural and cultural values.

In these two years, progress has been made with different projects to give cohesion to this territory that has more than two thousand square kilometers. These projects have been related to conservation, education and dissemination, and sustainable development, which include sustainable tourism. 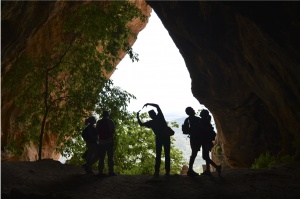 UNESCO World Heritage figure, which is the Cova del Tabac. For this celebration it was planned to do the inauguration of the new Cova del Tabac route, which can be visited through Espai Orígens and located in the municipality of Camarasa, one of the southern entrance gates to the Origenes Geopark. This act has been postponed due to the exceptional situation we are livinf these days and will be held when circumstances allow it.

The Origins Geopark is a territory that can be proud of its rich, diverse and exceptional heritage. And, in this celebration, it does it by linking two quality figures recognized by UNESCO, just as it did in the celebration of its first anniversary with the castellers (human towers), UNESCO World Heritage.

This cave was declared a World Heritage Site by UNESCO in 1998, for the prehistoric paintings it preserves on its walls, which are inscribed within the Rock Art of the Mediterranean Arch of the Iberian Peninsula. Time and the incivism of some of its visitors caused its deterioration, endangering these prehistoric paintings. For this reason, in 2017, the Camarasa City Council, the Center for the Study of Archaeological Heritage of the Autonomous University of Barcelona and the Service of Archeology and Paleontology  of the Generalitat of Catalonia launched a holistic project to enhance this cavity.

Since then the cave paintings have been restored and recovered, the cavity has been protected by regulating access to it, and geological studies have begun, as well as archaeological works – currently underway – which are providing contextualized data of the prehistoric groups that visit the cavity on a regular basis. One of the results of this project is the Cova del Tabac Route -will be possible soon with digital tables- which allows the knowledge generated towards this cavity to be socialized from a comprehensive perspective where archeology, paleontology, geology and history are incorporated from a didactic and playful perspective.

A Geopark is a territory recognized by UNESCO that has a geological, paleontological and mining heritage of international importance. This heritage serves as a tool for the development of the territory in a broad sense, that is, taking into account the other natural and cultural heritage and for the benefit of the local population.

The UNESCO Global Geoparks Network comprises (in 2019) 147 locations in 41 countries around the world, a figure that increases year after year with the entry of new territories.